In January 2020, I gave a presentation at Sofia Future Farm about a trendy marketing technique beloved by the start-up world, also known as growth hacking. I combined a lightning talk and a more hands-on part to share concrete examples, in a very SEO-fashioned way. This will de developed in another post.

The goal here is to uncover what growth hacking actually is. What should you really expect if someone is selling you growth hacking service? And why do we all get so excited about growing things in a marketing context? If you want to discover my personal take on this, enjoy this post!

A lightening talk about growth hacking and patriarchy

Growth hacking is a trendy marketing technique which is a little bit like sex in high school: everybody talks about it, however not that many people really knows how to do it.

Growth hacking was invented in 2010 by Sean Ellis and has been über trendy ever since. 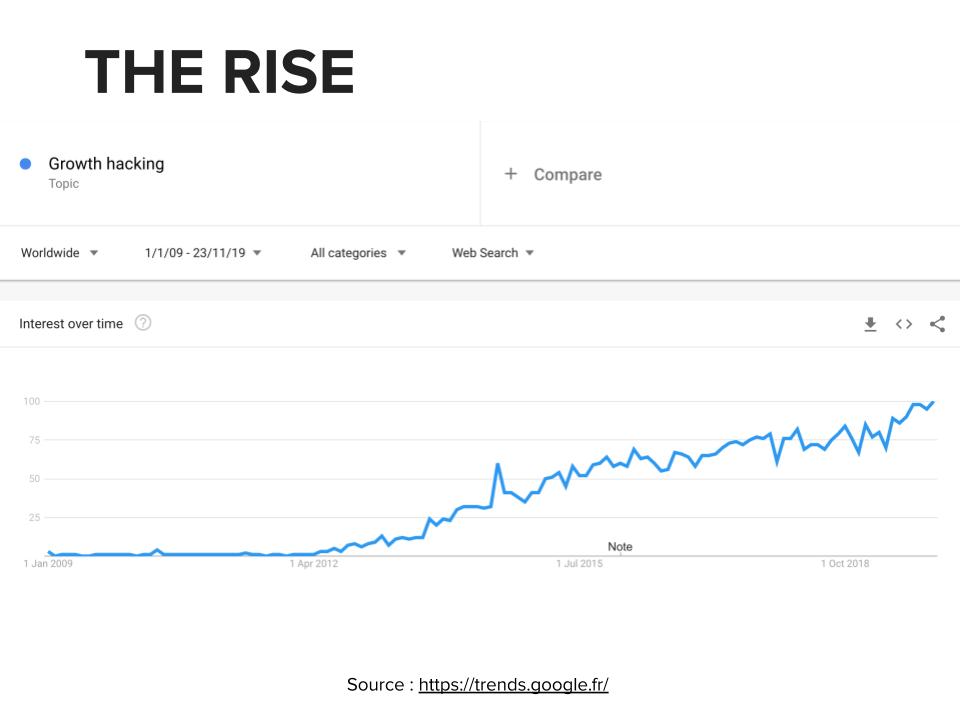 It started in relation to early-stage startups who need massive growth in a short time on small budgets (as you can read on Wikipedia). So growth hacking is intricately connected to marketing strategies for startups.

And, as you may know (since you're reading this on my website) a big part of my job (SEO, search engine marketing) evolves essentially around language and keywords. Recently, I was working for a cool Finnish startup (Calqulate, a financial reporting and forecasting platform). While heavily benchmarking other startups’ content strategy, I realised something was a bit off...The rhetoric!

The rhetoric of gross

Here’s what I could read everywhere:

"9 things you MUST do today to grow your small business" (smallbiztrends.com)

"We solve the hardest parts of subscription growth" (profitwell.com) 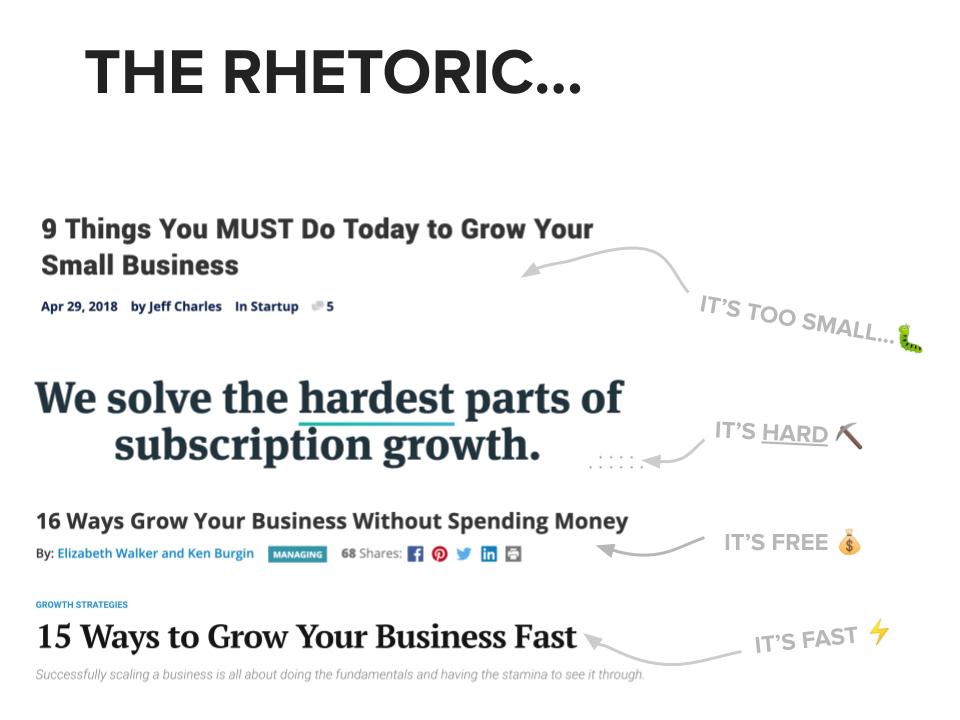 And I got this feeling of déjà vu in the early 2000’s and in a completely different industry: 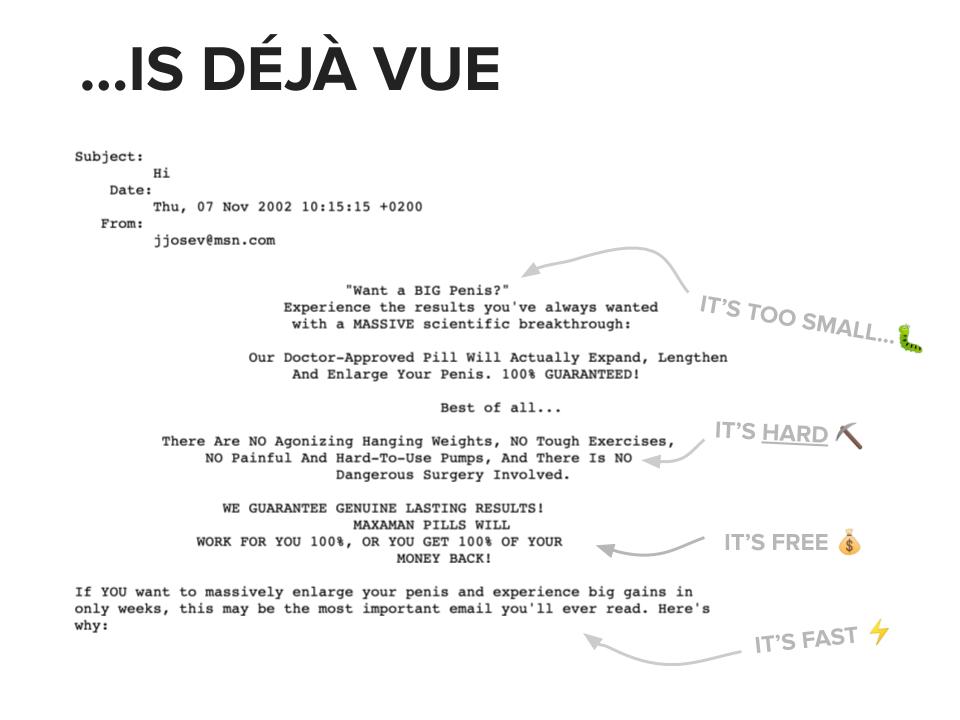 This is obviously a funny example but my point is simply to say that growth hacking was created in the startup world, where the gender gap is huge (one of the many sources treating this infamous topic). And so maybe, the hype around growth hacking is not only explained by how revolutionary and efficient this kind of marketing is, but also partly because it sounds appealing to refer to sex in a very manly way, even unconsciously...

And you can even add to the sexual connotation another sexy dimension: the piracy coming from the term “hacker”, which refers to internet and computer hackers.

In other words, this men-dominated world loves sex and pirates and big money (you don't say?!)

Now, what is it really about?

Growth hacking is just as much about acquisition than it is about retention because it’s a waste of energy and resource not to maximise the users value by retaining them once you’ve got them on your platform.

That’s why focusing on vanity metrics such as the number of subscription or the number of time an app is downloaded is a none-sense in terms of growth. You have to look at the bigger picture and check that your users are not churning.

Growth hacking is also a rather long and fully data-driven process. You need to define your true north metrics, run tests, measure the results and iterate until you find the magic recipe, which can take a while.

Therefore if you are only willing to try it out for a month, you’d rather not invest at all because this timeframe might be too short.

Part of the product development

And the last key aspect of growth hacking is its cross-functional approach. It basically means that all teams work together to achieve a common goal. The product or service is constantly tested and the users feedback are included in the development process.

Therefore it’s not for people not ready to have their product, features, offer (pricing) evolve based on the users’ feedback.

A mindset we can all adopt

More than being a marketing discipline, growth hacking is a mindset. It's about observing before assuming, it's about increasing the feedback, opening up the conversation in so many ways to eventually reach an amazing level of satisfaction that triggers virality.

Start-up, small companies or bigger corporations, we can all benefit from shifting our behaviour to a more data-driven, user-centric, and cost-efficient modus operandi.

This pastry chef had just started to run his own online catering service a few months before our collaboration. The resources were scarce, but together with his wife, their involvement in their online communication strategy was conversely tremendous.

Groupe Routage's ranking skyrockets from #90 to #7

A mailing house in France was planning to revamp their main website. They asked me to prepare a SEO audit to help them build their optimised V2. After its launch in August 2019, the organic traffic boomed and has recorded an increase of +220% until the end of November 2019 -and even more after that! Their main keyword, "routage postal" escalated from an average rank-90 all the way up to the first page, at the rank-7.

Enjoy this most nostalgic inclusion of the printed press golden age! Make sure you’ll enjoy Slush to the fullest thanks to this delightful personality test.

You don’t need extravagant resources to reach interesting results, relevant for the size of your organisation. The most important thing is probably your involvement in the project. If you want to collaborate with me, drop me a line.